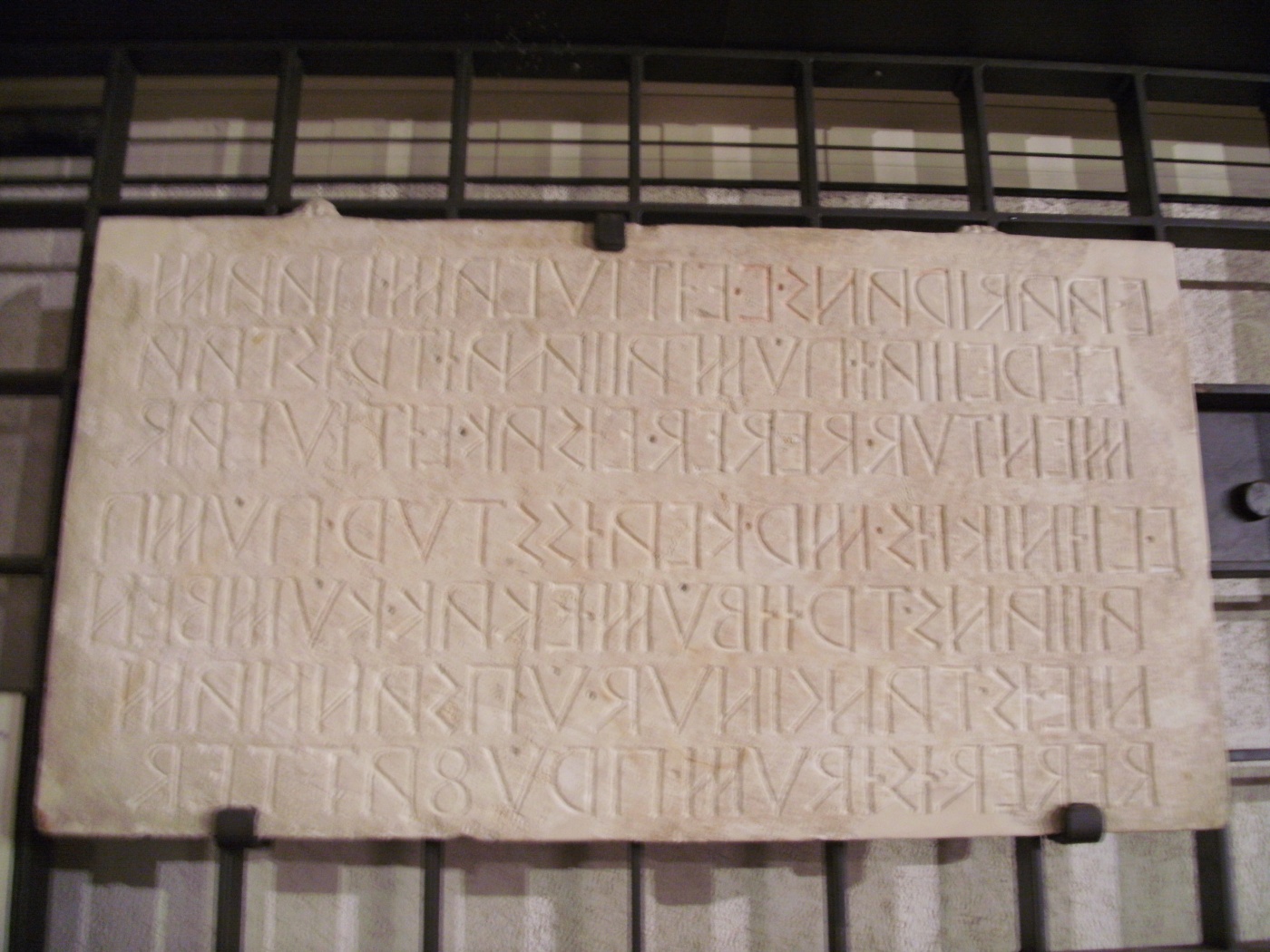 This week’s inscription spotlight is the text recording the building work done using a bequest from Viíbis Aadirans (a.k.a Vibius Adiranus, to use a Latinized form of his name.)

This text was found near the so-called ‘Samnite Palaestra’ (a smallish exercise ground) next to the Temple of Isis. The palaestra was probably damaged in the earthquake of 62 AD, and partially rebuilt, but a bit smaller, allowing the Temple of Isis to expand. Because of this rebuilding, and of course the devastation caused by the eruption of Vesuvius in 79 AD, we are not sure exactly what building this inscription belonged to. It is very possible that by 79 AD, it was no longer on display, and had been reused as building material. (It has sometimes been said that the inscription was a first-century AD recopying of a second-century BC original, but that is fairly unlikely.)

Here’s a photo of the inscription – see how much you can transcribe before you scroll down to read the transcription.

Using the information you already have from the previous lessons, you should be able to translate the majority of this text. There’s a translation further down the page, so you can check.

There’s lots of cultural information packed in here. We can see that it was possible to leave money for building works after one’s death – the inscription is a way of the executors showing that they had honoured the terms of the bequest. The man who had the building work completed is recorded – but of course the name of the man who provided the money is the most important, and appears first (with some slightly convoluted word-order as a result – don’t worry if it seems a bit odd when you are translating). Note that in both cases, the names are aligned slightly differently to the rest of the text on the right, so that they stand out.

Several institutions are mentioned. The vereiia was some kind of civic association, possible a youth association – but we know very little about it. The word kúmbennieís is interesting: it obviously means ‘assembly’ (literally ‘coming together’), but it’s peculiar to Pompeii – most cities used the word ‘senate’, borrowed from Latin. This kind of variation shows that the cities of ancient Italy were politically independent and had their own institutions.

Viíbis Aadirans, son of Viíbis, gave in his will money to the Pompeiian vereiia. With
this money, Viíbis Viínikiís, son of Maras, Pompeian quaestor, dedicated the
construction of this building by decision of the senate, and the same man approved it.

(Or, following the word order very literally: Viíbis Aadirans, son of Viíbis, money which to the Pompeiian vereiia in his will he gave – with this money, Viíbis Viínikiís, son of Maras, Pompeian quaestor, the setting-up of this building by decision of the senate gave, (and) the same man approved it.)