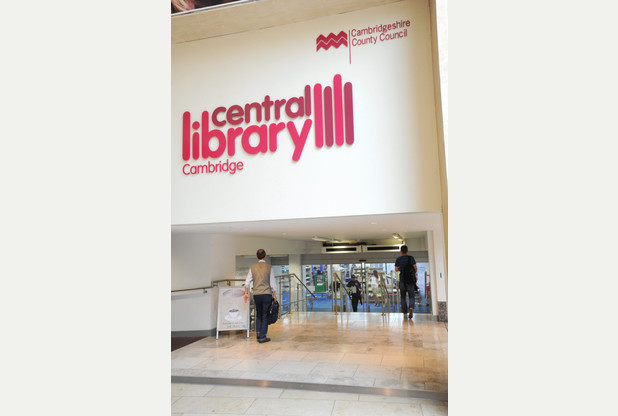 If you live in Cambridge, you might have been aware of a petition to stop the privatisation of the top floor of the Central Library.

This would involve turning part of the library that is currently free to all into a paid-for space. To quote from the petition:

Cambridge Central Library is one of the busiest public libraries in the UK, and its third floor currently houses a local studies collection, public computers, meeting rooms available to local groups at affordable community rates, and a popular cafe. Cambridgeshire County Council have recently proposed to cede much of this space to a multinational corporation named Kora (part of the Regus Group), which would use it to build a “Library Enterprise Centre” in partnership with the Council.

Although the report detailing the proposal claims that this project will “support individual employment prospects and the growth of small local businesses”, such support would be limited to those who could afford to pay for it. Libraries were founded on the principle of equal access for all, and retaining this principle is crucial to their continued role as levellers of inequality. We do not believe that a for-profit corporation can do the public sector’s job without harming the principles of social provision and community spirit embodied by libraries.

Additionally, UNISON Cambridgeshire County Branch have raised concerns about the Regus Group’s history of unethical business practices, such as a 2008 relocation to Luxembourg to avoid paying taxes in the United Kingdom or a 2010 case of profiteering described by the British Property Federation as a “cynical move”. We do not want to see the public sector enter a partnership with a company with this kind of history.

Unfortunately, after a long campaign by some very dedicated people, the council Enterprise Centre voted (by a majority of just 1 vote) to go ahead with the privatisation. But there is still hope! Several councillors are asking that this decision be revised and receive a fuller debate, involving the whole council. I got this email this morning:

We bring you hopeful news about the Cambridge Library campaign: Cllrs Walsh, Scutt, Taylor and others are attempting to get the Enterprise Centre decision called in so it can be debated at full council. The councillors feel as strongly as we do that too much remains unexamined, and that to go ahead with this plan in such a manner is deeply undemocratic.

To achieve the call-in, 24 of our elected representatives need to back the request. We therefore urge you to write to or telephone your local councillor as soon as possible asking them to support the call-in, regardless of how they personally feel about the scheme.

We must do this urgently, as the call-in request would have to be submitted before Tuesday of next week (9th June).

If you live in Cambridgeshire, please take a few minutes to email your local councillor and tell them to support the call to revise this decision.

You can find out who you councillor is here.
Contact details for councillors are here.

When I first moved to Cambridge, it had no public library at all, just a mobile van that occasionally turned up in the market square (the Grand Arcade was still being built). In a city which probably has more books per head than almost anywhere else in the country, it was a disgrace that there was no library provision for the general public. The new library is very well-used – even over-full a lot of the time – and there is no justification for selling off one-third of this vital public service.

About 12 hours after I posted this, I saw this tweet:

Excellent news – @CambsCC has ‘suspended further work’ on the Kora takeover of the top floor of the library. Well done @PhilRodgers#fb

In the end, this wasn’t anything to do with the public dislike of the proposal. It turns out that the director of the company Kora, who was going to buy the top floor of the library, is banned from being a company director in the UK. The Cambridge News has the whole story. So, for now at least, the Central Library has had a reprieve.