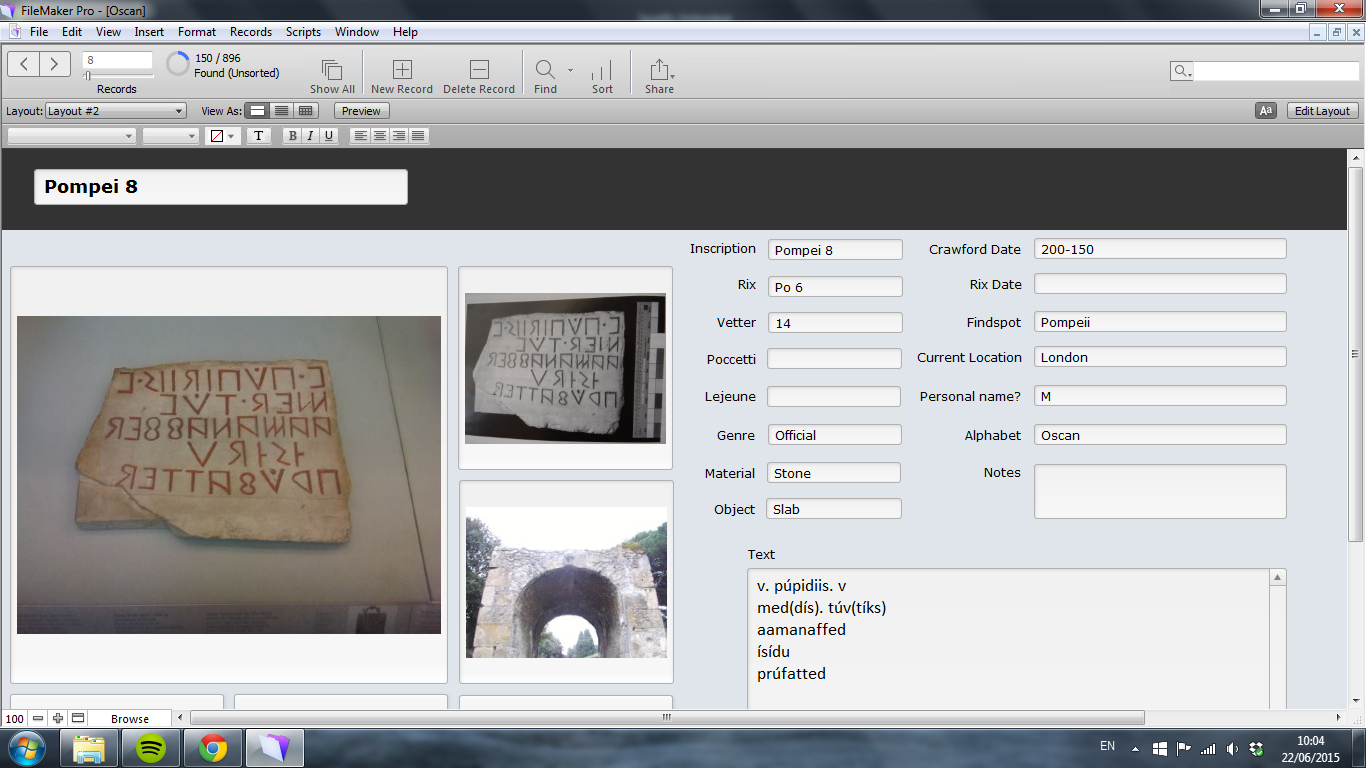 This term, I’ve been caught between putting the very final touches to my book and getting stuck into a new project. The beginning of a new research project always seems like a good time to re-evaluate how I’ve been working, and to investigate what new (or not so new) digital tools are out there that might make my life easier. As term ends, here’s a quick round-up of those I’m now using regularly and those that didn’t quite work out. 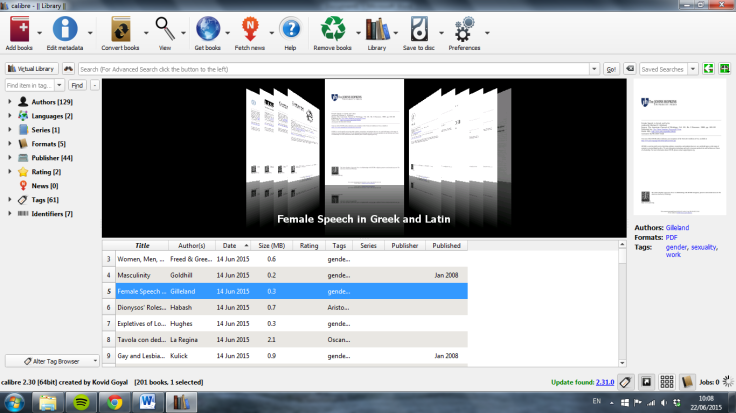 Calibre has been around for ages, but it’s new to me. Essentially, it’s a “library” tool for organising and tagging all your digital books. Calibre can store documents of almost any format, convert between formats, and send material automatically to your e-reader of choice. It creates the metadata automatically from the file, but you can edit this however you wish, for example, by tagging certain articles as belonging to a certain project. I’ve found it really helpful to have an easily searchable library for all my many ebooks, ebook chapters, PDFs, and other downloads. I know many academics use Zotero, Mendeley or similar bibliography management programs for organising their documents, but somehow that never worked for me. I find Calibre’s layout and capabilities much more helpful. Definitely watch the demo video for help getting started.

For my PhD, I created a number of simple databases in MS Excel, but spreadsheets aren’t that convenient for including pictures or the full text of inscriptions. On the advice of an archaeologist friend, I tried out FileMaker. It’s paid-for software, but there’s a considerable educational discount and you can use a 30-day free trial to check that it meets your needs.

I’ve really enjoyed revisiting my texts and adding pictures of as many as possible. One entry in the database now looks something like this: 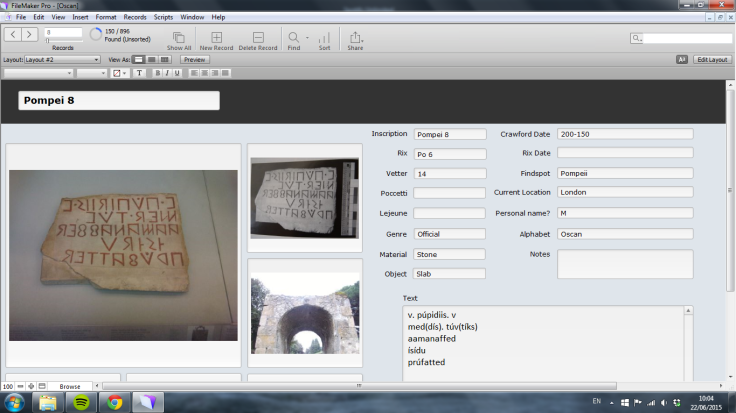 As you can see, I’ve got all the metadata I might need, pictures and a full text of the inscription. It’s also easy to add relevant PDFs, additional information and extra images. For example, I added a button for extra contextual pictures, which I can see by scrolling down and clicking where it says “Context”.

The search capabilities are also much better than in a spreadsheet, since FileMaker will search around punctuation and accents. So for example, if I search the full texts for the Oscan phrase dunum deded, “gave a gift”, it will include inscriptions which include dunum deded, dunúm deded and dunum. deded.

The programme is really designed for much larger and more powerful databases, often shared between whole businesses, and so the software took some getting used to. On the plus side, they have very active forums, and if I had a question someone always got back to me within a couple of hours. The newest version seemed to freak out Dropbox a bit, but since I’d already bought the software I decided to work round that issue.

I tried and didn’t like Evernote (see below), but I really enjoy using OneNote. For a start, it’s part of MS Office, so it was already on my computer. You can use OneNote in all kinds of different ways, depending on what you need – you can “clip” sections from blogs and newspaper articles to store them for later, and you can organise your own notes into virtual “notebooks” and “pages”. So far, I’ve found this very helpful for notes that I need to refer to frequently, and reminders to myself that I will need in a few months which I might otherwise misplace (such as notes on what to add to a student reading list next year).

But really my enthusiasm for OneNote comes down to its OCR ability. Because many libraries now prefer taking photographs to photocopying, I have many book chapters copied in photograph form, which can be quite inconvenient to read. I’ve tried a few OCR programmes and found them all useless, particularly where a text contained several different languages or any ancient languages at all. (I believe this is because a lot of text recognition is actually not reading all the characters but trying to guess what English words are there from contextual clues.) OneNote, surprisingly, can read the text out of a photograph completely instantly and effortlessly. Just write click on the photo, select “Copy Text from Picture”, and then paste to wherever you want. Here is a sample from the Tabula Bantina (an Oscan legal text): 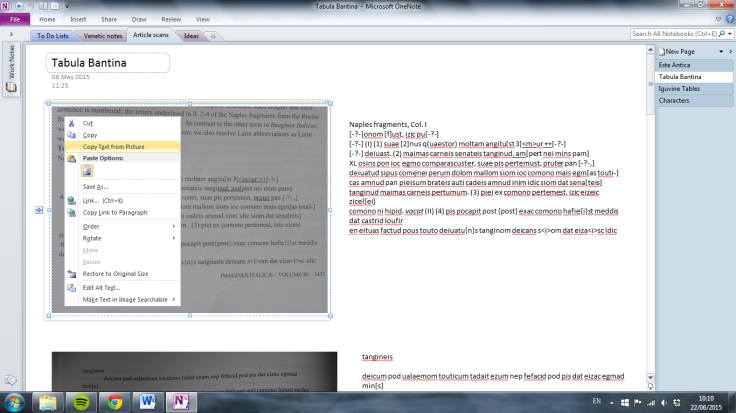 There are limitations to OneNote’s magical powers – the photos have to be quite straight, and have good enough contrast. But the fact that it can cope with Oscan has me sold – several historian friends have tried this out with their archive photos and report that it is also fine with Italian, French and Traditional Chinese. If you need a searchable or easily readable text from a photo, this really saves masses of time.

I know lots of people love Scrivener, and I really wanted to love it too. In theory, it seems like a great idea for long writing projects, because the program divides up your project into manageable chunks of text (no more scrolling through pages and pages of Word documents to find the section you want to work on). It also allows you to view your notes alongside your writing (no more switching between multiple tabs). The user interface is also nice and intuitive, and so I stuck with it for a week or so. Unfortunately, there is little support for non-English characters, including polytonic Greek and IPA symbols. I understand that many people love a pared-down word processing document, but I need non-English characters every day and this simply makes Scrivener too inconvenient to use. If its capabilities ever change, I’d definitely try it again, but for now it’s back to Word for me.

Just like Scrivener, I’d heard great things about Evernote, but I just didn’t get on with it. Above a certain upload limit, it’s a paid-for subscription service, and I reached the free limit in just a couple of hours because of the amount of photographs I wanted to add. That alone made OneNote a much more convenient alternative for me. If you use iOS, Evernote has capabilities such as hand-writing recognition that OneNote lacks – but since I don’t have an iPhone this was irrelevant to me. Personally I also found OneNote easier to organise into notebooks and pages, with Evernote more reliant on tags, but many people clearly prefer Evernote in this regard too.

Finally, I’d just like to say thanks to the many academics who take the time to suggest new tips and tools. The most helpful of these is Dr Inger Mewburn of the Australian National University, otherwise known as the Thesis Whisperer, who often suggests great new ways of working and discusses research tools regularly on twitter.

This post was also blogged at the Greek In Italy project blog.