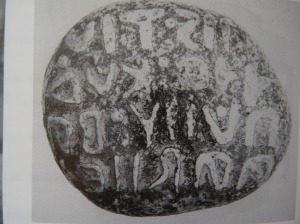 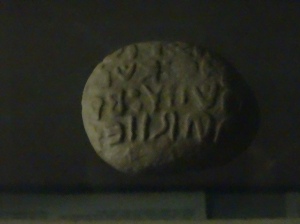 It’s not often that I’m tempted to describe an inscription as “cute”, but I’ve always found this short Oscan dialogue completely adorable. (That’s probably not a very academic thing to say.)

We don’t know exactly what this stone was used for or why it was inscribed. It’s small and fits easily in the hand, and shows a certain amount of wear, especially to one spot on the reverse. This has lead some to think of it as a “door-knocker” – though I don’t know whether we have much evidence that people used a special device for knocking on doors in the south of ancient Italy. The dialogue identifying the owner makes it most similar to the texts written on sling-shot bullets, which often have the owner’s name on (or a helpful message like “Fuck off”), but this stone is quite a big larger than a normal sling-shot bullet. More recently, other scholars have seen Baitis’s stone as a small funerary inscription marking a grave, but its language and size are unlike any other Oscan funerary inscription.

Personally, I’m tempted to see it as a bit of idle carving done when the stone cutter was bored, or maybe as a silly present to give his girlfriend. I say “stone cutter” – in fact, it’s hard to know what kind of person Baitis Aadiis Afinis was. It’s relatively rare at this time, though not impossible, for someone other than an aristocrat to have three names (like the Roman praenomen, nomen and cognomen), so he might in fact have been fairly wealthy. All the more reason to see him as a guy with time on his hands?

Linguistically, the text is unique in showing us a small glimpse of an everyday conversation (if you view a conversation with a stone as an everyday activity). In fact, I think it’s the only time the word “I” is ever used in Oscan – partly because Oscan, like Latin and now Italian, doesn’t need to include a pronoun before a verb to be understandable, but also because inscriptions in the first person are uncommon.

8 thoughts on “A Stone Talking to Itself”