The Cambridge Greek Play desperately needs a new website. Very soon, I’m pleased to say this website will become a reality, and I will certainly be plugging it and providing links when it launches. Fortunately, we are paying some highly talented and professional designers to construct the website itself, thanks to a donation reserved for this purpose. (The donation also paid for the filming of the 2013 plays, PROMETHEUS and FROGS, which I’m thrilled to say have already been seen by about 300 people each in their first week.) But it had to be up to one of the committee members (me) to upload all the content from the old site and, preferably, put together plenty of new content as well.

As someone who deals more with inscriptions than archives, last week was a journey of discovery for me, aided hugely by our wonderful archivist Vanessa Lacey and the nice people in the University Library Manuscript Room. There’s more in the archive than I could hope to digitise in the relatively short time available, but I really wanted to prioritise (a) getting at least one or two photos from every single Greek Play from 1882 to the present day and (b) gathering up in one place as many as possible of all the education resources that have been produced for schools and universities during the past few productions. Hopefully this means that the new website will be a resource for academics and drama practitioners interested in the history of the production, while also standing as an ongoing resource for schools and universities teaching Classics, Greek, drama and design.

I’ve not quite reached my goals – if anyone has any photos or programmes from 1989 or 1992, please email me right away, because those years are missing for now. Currently, the website is still in its previous state – but I’d like to share some of my favourite archive finds here too in advance of the new website launch.

Several productions were inspired by archaeology in their design. Agamemnon (1953) used a gate based on the Lion Gate in Mycenae, as you can see from the Watchman scene below:

Antigone (1959), uniquely, went for a design based on the pre-Greek Minoan civilisation, resulting in some amazing costumes, particularly for Antigone and her sister Ismene. 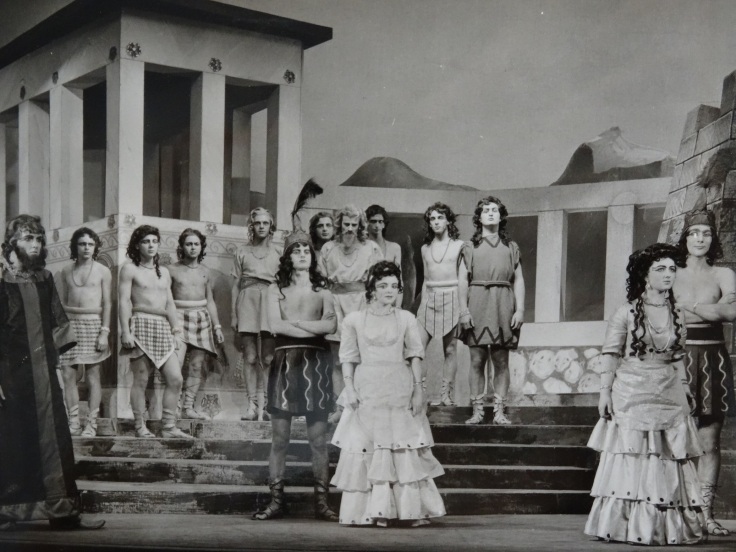 In general, some variation on ancient costume was the norm for the Greek play until the 1990s, when modern dress started to be used more and more. Here’s an example, the chorus from Agamemnon (2010).

The Cambridge Greek Play has a long history of actors, designers and musicians who later went on to greater things, or even were fairly famous at the time. Rupert Brooke played the Herald in Eumenides (1906), Ralph Vaughan Williams famously wrote the music for Wasps (1909), and Tom Hiddleston starred as Orestes in Electra (2001). I knew about some of these people’s involvement, but other names then jumped out which I had to go and check were the people I thought they were: M.R. James as Peithetairos in Birds (1883), James Mason in the chorus of Bacchae (1930). I even found our illustrious professor Simon Goldhill in Electra (1980). I can’t spoil the surprise of all the photographs on the new website, but the woodcuts for the Oresteia (1933) by Gwen Raverat were a particularly nice find. 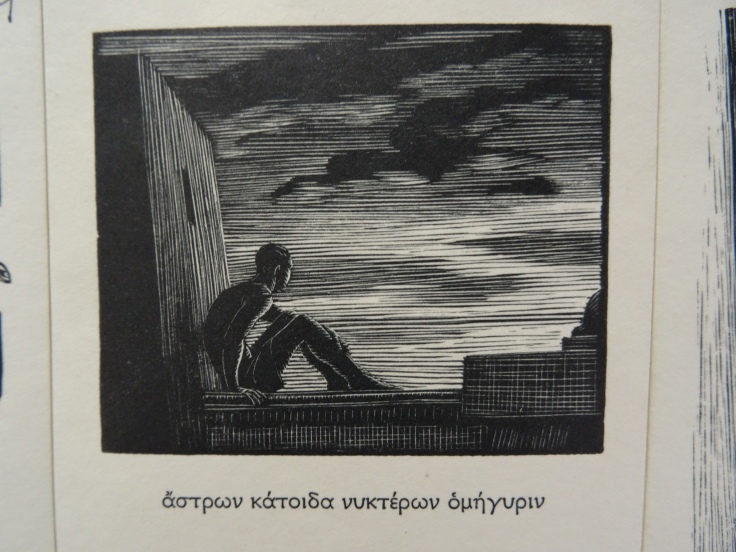 My time with the archive made me wish I knew more about the history of photography, because I felt I could feel the art form changing before my eyes. The earliest productions have mainly studio portraits of the cast in their costumes, but at some point in the 1920s it became possible to take more casual snapshots, including still shots from the production itself. Some of these can be quite blurry and aren’t clear on details, but then around the 1950s some really beautifully shot professional production photos emerge. There are no colour photos in the archive until about 1989, and in the 1980s and 1990s there seems to have been little interest in making sure that there were photographs preserved for posterity. In recent years, the focus on professional, beautiful production photography has re-emerged again. A few of my many favourites are below, though there are too many wonderful photographs to include them all here. 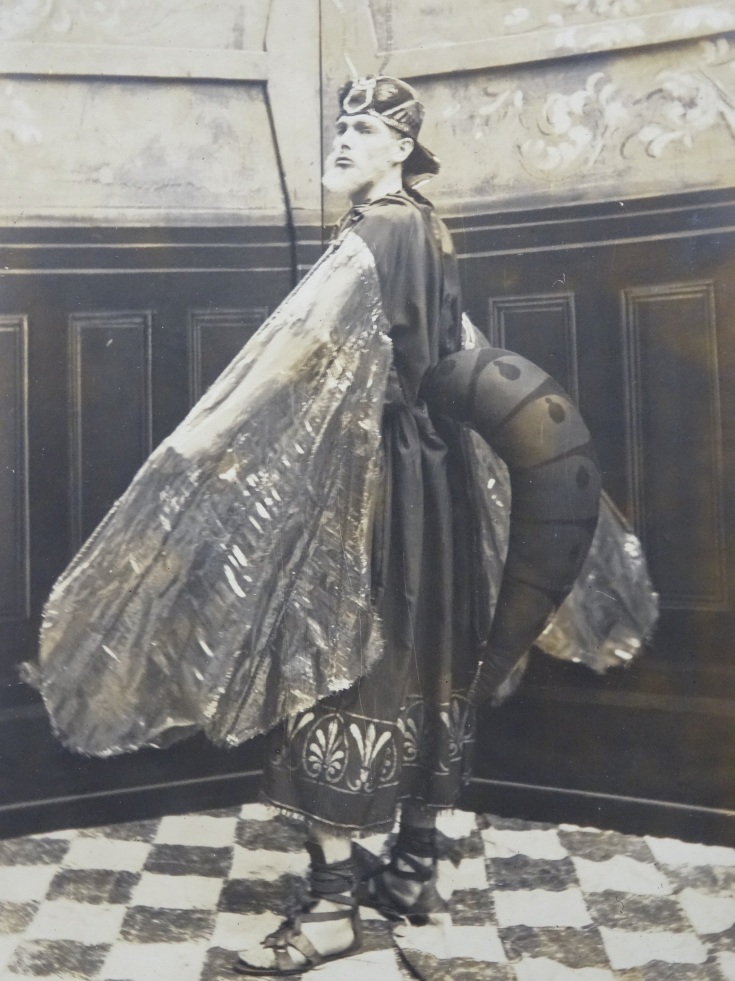 Ronald Watkins as Electra and Unknown as Orestes, Electra (1927) 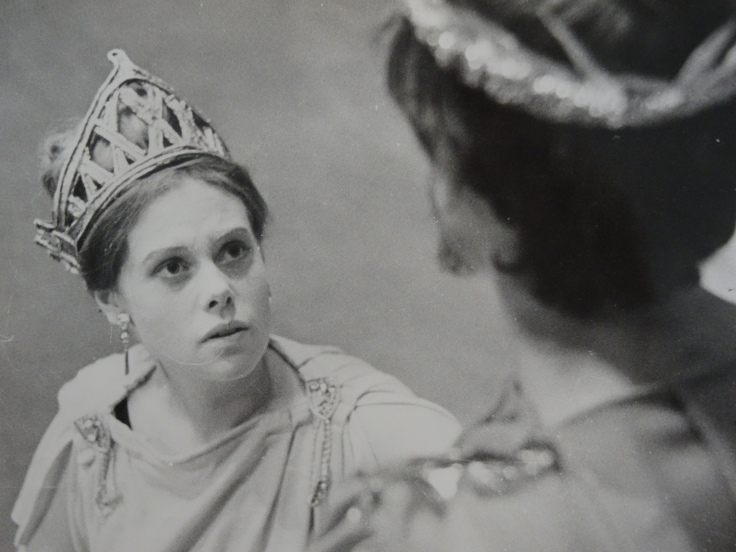 The history of the Greek Play mirrors the history of Cambridge in so many ways. Apart from an early portrayal of Athena (Janet Case in Eumenides 1885), no women appeared in the Greek Play until 1950, eerily echoing the denial of women’s full membership of the university until 1947. The women of Cambridge are, of course, always around – they played in the orchestra, designed the programmes, made the costumes or handled the publicity. They were often essential to the plays success, but they were not the front men. When Electra was produced in 1977, a reviewer in a national newspaper noted that the last time Sophocles’ play had been produced, the part had been played by Ronald Watkins (pictured above), who was 6 foot 5 – fortunately the reviewer loved Kathryn Porter’s perhaps more authentic take on the character (pictured below).

The play reflects Cambridge history in many other ways too, and particularly the history of Classics at Cambridge. I get the feeling from the scantiness of the archive in the 80s and 90s that Greek was felt to be a bit of a weird minority pastime, and not really something that would carry on for long. That was an era when Greek and Latin in schools was in steep decline, and increasingly looked like an anachronism. But since 1998, the Cambridge Greek Play has been back in full swing, staged by a professional production team and looking more vibrant than ever. It’s no coincidence that Classics has become more popular in schools during that time, and that as a profession we are doing more and more to engage with the public about our work. In many ways, the Greek Play is one of our largest pieces of outreach work.

Some of the notes and letters in the archive are fascinating, and I didn’t have anything like enough time to photograph and upload them all. A few things intrigued me – did people in the nineteenth century usually talk through the performance? Did they usually smoke too? And sometimes the archive is a brilliant look into a university life before email, which I never experienced – notes advertising upcoming theatre productions and auditions had to take physical form in a way which is ancient history to me. There are many more – one sad exchange of letters ending the relationship between the Greek Play and its usual photographic studio, another turning down someone’s request to appear in the chorus. 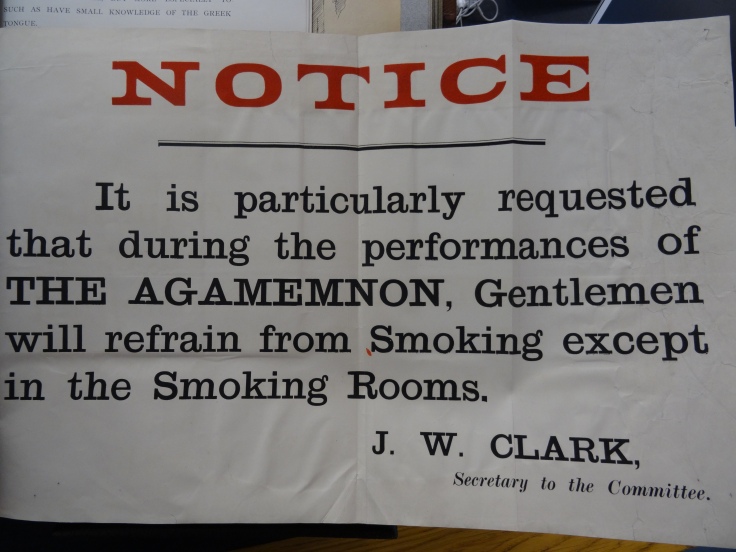 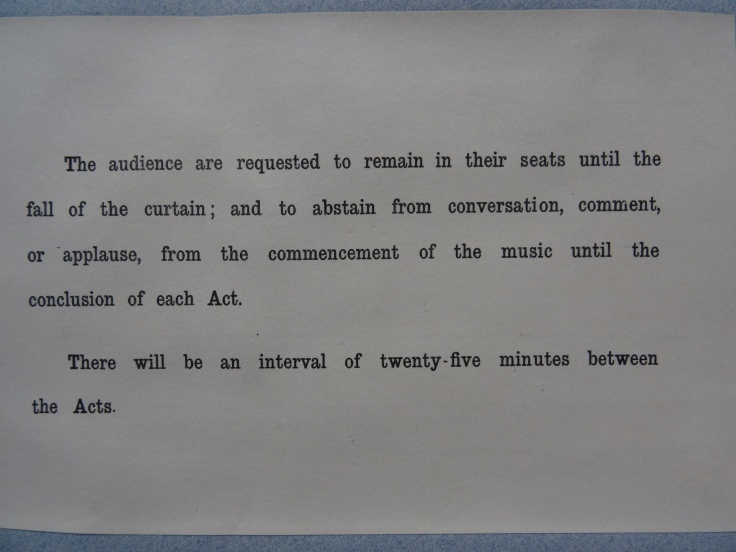 For every photo I’ve uploaded to the new website, I could probably have included five more. If I’d included all the newspaper reviews too, I would have been there for weeks. But I’m pleased with what the new website will look like, and the vast improvement it will be as a resource and a record of the last hundred and thirty years. I’m particularly pleased that the contributions of many hundreds of people to this piece of Cambridge history will soon be more widely known.

All photographs are (c) The Cambridge Greek Play Committee. Please do not reproduce without permission.

One thought on “Archiving the Cambridge Greek Play”