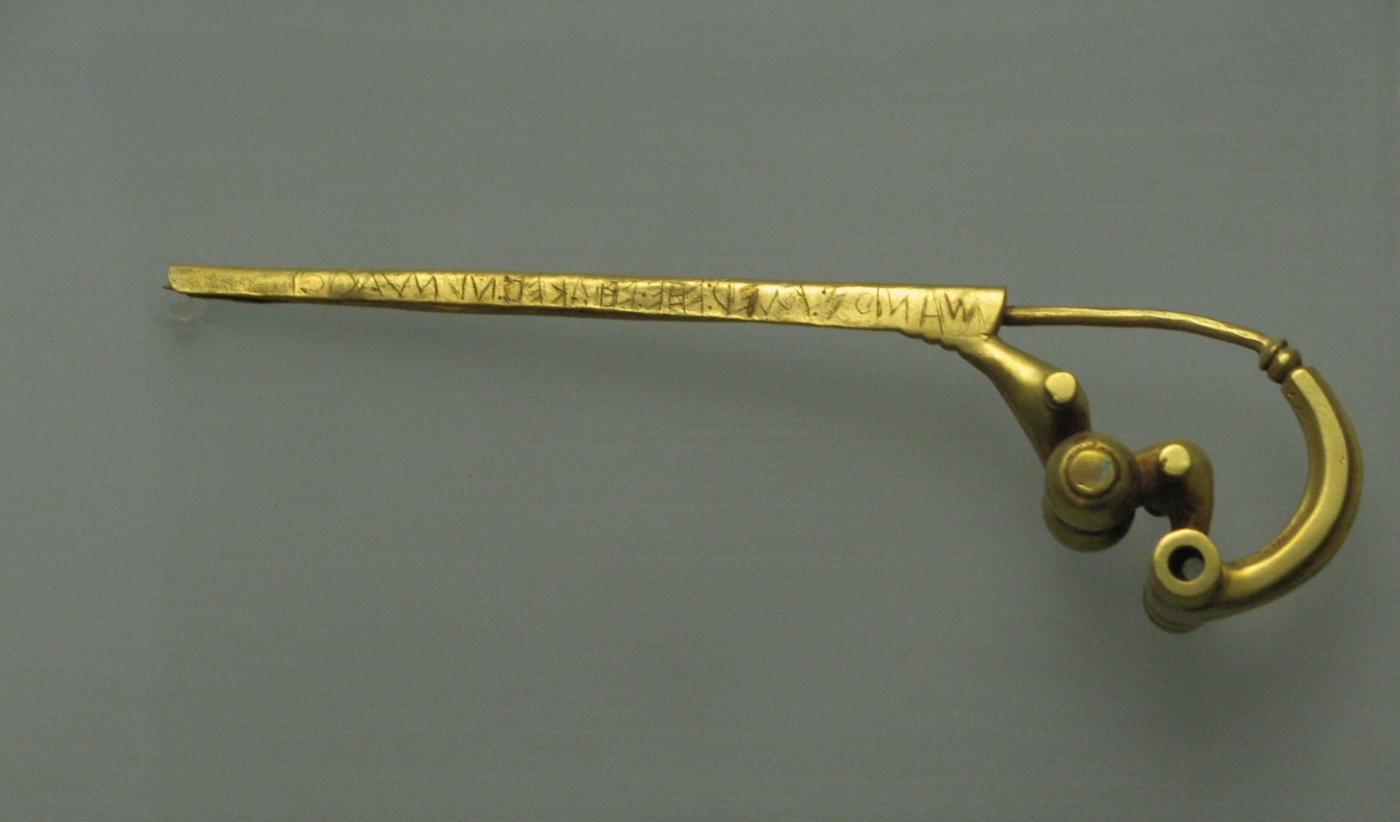 Last week, as I was writing a chapter on alphabets and writing in ancient Italy, I asked the people of Twitter whether they thought the Praenestine fibula was fake or real. The results were intriguing (although most people, understandably, hadn’t heard of it).

The gold fibula, or brooch, was first presented to the German Archaeological Institute in 1877, and this is where the problems begin. It was presented by Wolfgang Helbig, but the owner was Francesco Martinetti – an antiquities dealer with a record of adding fake inscriptions to real ancient objects to enhance their resale value. Neither Helbig or Martinetti was completely straightforward about where the fibula had come from, and there were suspicions even at the time that it had been stolen from an excavation.

The inscription immediately made this fibula, dated to around the eighth century BCE, one of the most important objects in the history of Latin. Not only would it be the earliest recorded Latin, but it showed a number of features that had been theorised for pre-historic Latin but had previously been unattested.

Manios made me for Numasios

If you know any Latin, you might be able to spot a number of the differences between this inscription and Classical Latin. The ending of the men’s names is -os instead of -us; the pronoun me ends with a -d, the verb ‘made’ is written fhefhaked instead of fecit, and the sound f is spelled fh, among other things. The name Numasios also has an -s- between vowels, which would later become an -r- (this name eventually became Numerius). These features show an intermediate stage between Proto-Indo-European and Classical Latin, and fit perfectly with the development of Latin around the eighth century.

It is not clear whether Martinetti would have had the knowledge to create a fake that mapped so closely onto theories about early Latin; but on the other hand, some have felt that the inscription has too many amazing features to be real – it’s simply too good to be true. The linguist Margherita Guarducci suspected Helbig was the one who had taken the lead in producing the fake. In general, the object was believed to be genuinely old, but some scholars raised questions about the authenticity of the fibula itself.

In 2011, a scientific team (Edilberto Formigli and Daniela Ferro) used an electron microscope to try to settle the question. They examined the surface of the gold within the lines of the inscription itself, and their conclusion was that the micro-crystallisation of the surface was consistent with an ancient inscription. Daniele Maras has written a good summary of the 2011 findings, and he is clearly convinced by the scientific evidence. Others have perhaps been slower to agree, and there remains a question mark over this important object and its origins.

I myself believe that the inscription is probably real – although perhaps more through wishful thinking than anything else! It’s been pointed out to me several times that an inscription that includes the word fhaked can’t really be real… can it?

One thought on “Fake or fortune?”