Today’s inscription is a fantastic example of linguists getting a huge amount of information about ancient societies out of very short texts. How short? Well, about two letters actually.

Buxentum 2 (c. 300 BC) reads <ΔΗ>, or <DE> to transcribe it into the Roman alphabet. The two letters are joined by one of their lines, to make one symbol. The inscription is written on the handle of a bronze caduceus (staff) – below you can see it together with the metal fixing from the top in the shape of two snakes. You might recognise the caduceus as a modern-day medical symbol, though in the ancient world it was often associated with Hermes and other deities who carried messages.

So what does DE stand for? The most probably explanation is that this is an abbreviation for de(mósion), meaning “public” or “of the people” in Greek – the Greek word for “people” or “citizen body” being demos.

The plot thickens, though, because this inscription is not from Greece, or even from one of the Greek-speaking cities on the coast of Italy. It is from Roccagloriosa, in Basilicata (ancient Lucania). We usually use the Italian name for the site, because we don’t know what its ancient residents called it, although the Greek city of Pyxous (Roman Buxentum) is nearby on the coast. 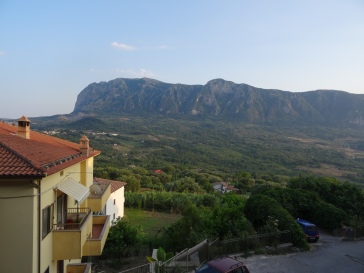 The only other inscription found at the site is a fragment of a law code, written in Oscan. Apart from one Greek-influenced spelling (double gamma for the sound /ŋ/), which appears to have been partly corrected by the engraver, the law shows no influence from Greek law or the Greek language, apart from the fact that (like most of the Oscan inscriptions of this region) it is written in the Greek alphabet. This law also refers to things being “public”, but with the normal Oscan word toutico-, from the word tout0 “people”. (To go off on a tangent – this is a great word, and turns up in lots of Indo-European languages, including being related to the word Deutsch “German” (but originally “the people”), Lithuanian tautà “nation” and Irish túath “people”, and in English place names like Thetford “public ford”, among many many others.)

So we have two contrasting uses of language at Roccagloriosa – and two different words for “public”. From this evidence, and evidence from other sites in the region, it looks as though Oscan touto was used as a close synonym for Greek demos. It might even have connoted some of the same quite culturally specific ideas around urban layout, how the city was run, and more abstract concepts like group membership and citizenship. We tend to associate this level of political complexity with Greece and Rome, and not with their contemporaries, but we always need to be careful in jumping to conclusions about societies we know little about. The equivalence of touto and demos is one piece of evidence that Oscan speakers were more sophisticated than people sometimes think.

There are lots more questions to consider here, though. If the caduceus and the law inscription were made around the same time, which we suspect was the case, were both Greek and Oscan being used for official purposes at the same time? Was the population, or at least the elite, mainly bilingual? Was there any meaning behind the use of Greek for one purpose and Oscan for the other, or did they use both languages for lots of overlapping purposes without much thought?

These are not easy questions, although the labelling of “public” objects and buildings seems to have its origins in the practices of Greek cities. Either the caduceus originally came from a Greek city, or the people of Roccagloriosa had picked up the practice of engraving public objects from their neighbours, and had continued to use Greek for this purpose. We can also see that law and legal writing might have strong ties to local traditions and customs, which would make Oscan the more appropriate language for writing a law on bronze. The Greek cities of Italy also don’t seem to have written many laws on bronze, so that practice seems to have been much more associated with Oscan- and Latin-speaking culture.

It just goes to show, there’s a lot you can do with just two letters.