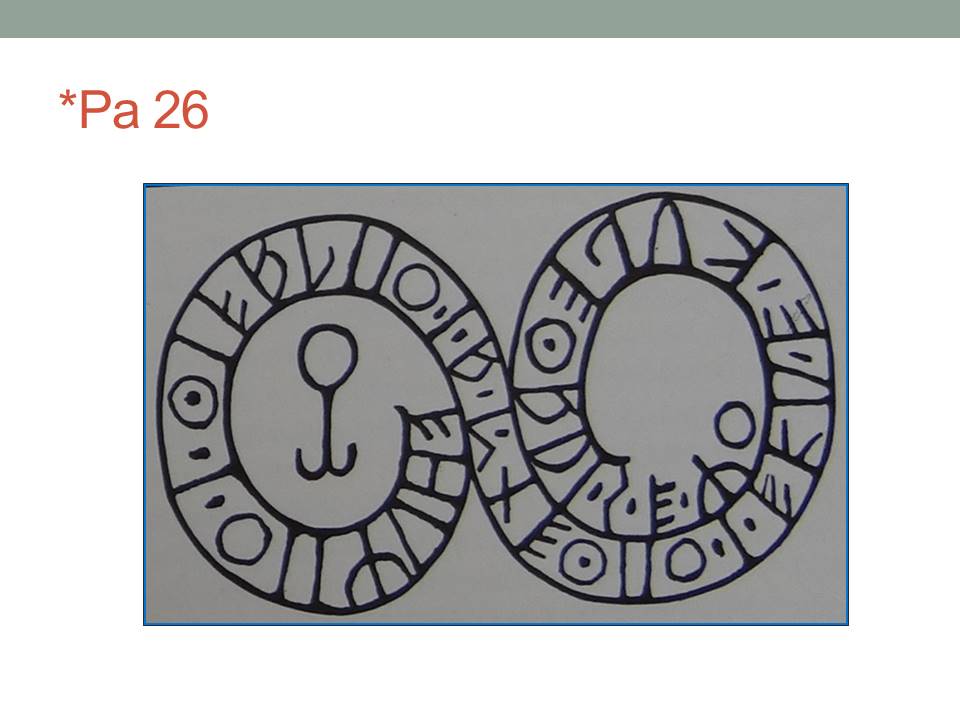 Yesterday we had the first of two introductory seminars on Venetic. The high point was, of course, the excellent cake by Anna Judson, shown here with Anna holding it up next to a picture of the inscription itself for comparison. As you can see, it was both tasty and highly accurate! Epigraphy-themed cakes have become a bit of a theme of these Easter term seminars, and Anna has blogged about quite a few of her previous cakes on the Res Gerendae blog.

Even if you feel you know some material pretty well, talking it through with a room full of linguists will quickly raise new questions and problems to solve. I’d been a bit trusting about some of the readings in the editions, but we quickly found that these didn’t always quite match the images.

One of the inscriptions which produced the most discussion was *Pa 26.

This is a rounded piece of red Alpine porphyry, with an inscription wound around in a great double-spiral shape. The type of inscription is a bit of a mystery – the formula used is identical to Paduan funerary inscriptions, but this inscription (and others like it) are not from funerary contexts. Usually, they are simply found in the middle of fields, miles from any ancient built-up areas. There are all kinds of theories: that they are boundary stones (though they are a bit small and moveable for that), that they are memorials for people who went missing or were lost at sea (though why place them so far from funerary contexts, on the borders of the territory?), or that they have some other purpose we don’t know about. They are almost exclusively found in Padua, although outside the Veneto, there are also Etruscan examples and (possibly) one Oscan example.

To read this text, you need to start from the inside of the spiral on the left (in the bottom picture). The transcription of the text I had found previously was:

The curly brackets around {vku} indicate that the editor thinks these letters are a mistake and should be deleted from our reading. But, as the linguists of the E caucus pointed out, on the drawing it looks much more like eku. These, of course, are the first three letters of the next word. But why did the writer repeat them? There doesn’t seem to be much wrong with the letters which would motivate him starting the word again, other than the lack of punctuation around the first vowel <e>. That doesn’t seem like a big enough problem to make him start again. Or did he get called for his lunch, and then forget where he’d finished when he came back? (You see that kind of thing more than you’d think in ancient inscriptions.) The addition of three extra unneeded letters also seems to make him run over the end of writing space he had marked out at the end, so it doesn’t seem like <eku> is an intentional extra word either.

But perhaps <vku> is the correct reading, and the carver felt that was enough of a mistake to start the word again. It’s still not a very satisfactory solution, since it’s not hard to turn a v, which is an <F> shape in this alphabet, into an e, which is an <E> shape. But perhaps there was some other problem with the inscription which is not clear from the drawing; unfortunately, I don’t have a photograph which shows this part of the inscription, so I can’t confirm either way. So for now, this remains a bit of a mystery – but still a very cool inscription (possibly one for a future cake?).

Many thanks to all of the E caucus for a great discussion yesterday. Next week we will tackle the only long-ish Venetic inscription! I’ll let you know what we manage to make of it.

You can download the introduction to Venetic handout for week 1 of the seminar (slightly corrected) and the Venetic vocabulary I put together for the sessions, and also a PDF of the slides to see the inscriptions we were reading. If you spot any mistakes, please give me a shout and I’ll correct them.

One thought on “Venetic seminar week 1”