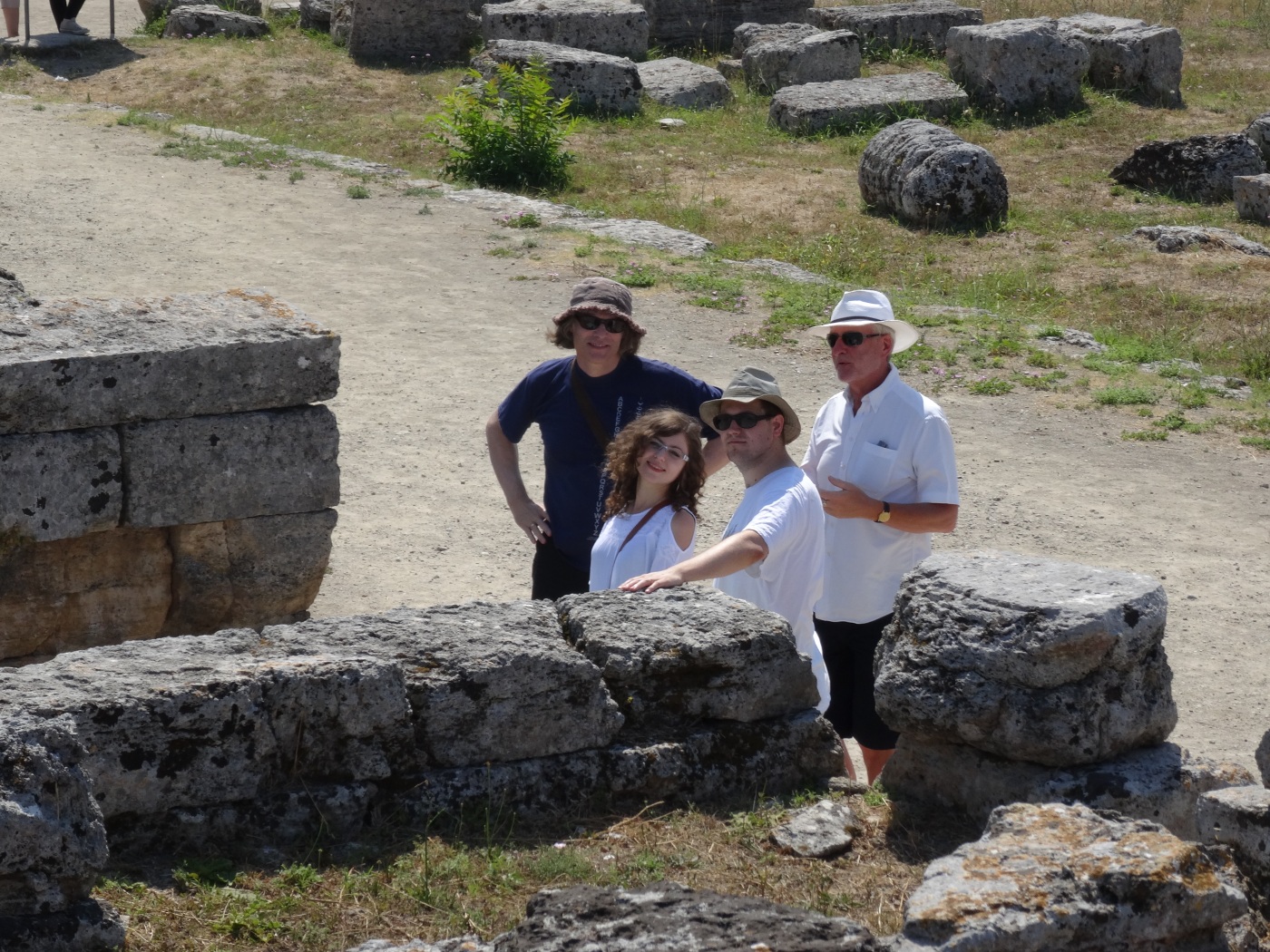 This weekend we celebrated the retirement of our Professor of Comparative Philology, Geoff Horrocks. I’ve worked with Geoff for a number of years, during which he’s been my second PhD supervisor and a co-investigator on the Greek in Italy project.

As the speeches at last night’s dinner attested, everyone has their favourite memories of Geoff’s influence on them. Geoff has been an important part of so many people’s careers over the 30 years he’s been in Cambridge, and Classical linguistics has grown hugely within the department under his leadership. His academic work really speaks for itself, but he’s been a particular inspiration to me for his kindness and generosity. He’s never hesitated to give advice and help, even when all I needed was a bit of reassurance that I was heading in the right direction. He also gave some of the clearest, most interesting undergraduate lectures I ever attended, and really drew me into Classical linguistics (even syntax!). We should all aspire to follow his example in our academic and professional lives.

Before we could get to our celebratory dinner and reminiscences, though, we saw Geoff off with a mini conference. Rob Crellin, Patrick James, Pippa Steele and I gave papers linking to various aspects of Geoff’s work. As the representative of the Greek in Italy project among the speakers, I went for the ancient Italy angle.

My own paper was mainly based on this post about Oscan in Early Modern Italy. It also included a follow-up on a comment I made in that post about the  Wikipedia article on the dialect of Muro Lucano. When I wrote that post, I said that it said that the Murese dialect was thought to be derived from Oscan. After the intervention of several other Wikipedia users, neither of whom seem to be professional linguists, the statement about Oscan has been declared “highly improbable” and removed. Is this down to the influence of the Greek in Italy project perhaps? 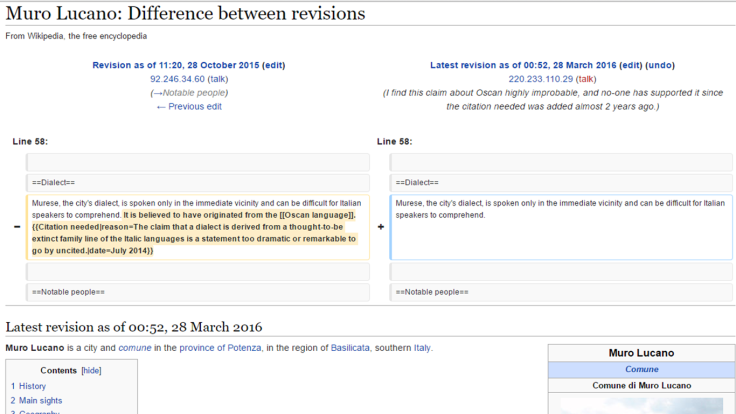 There was also a section in my talk about the use of Oscan and the Tabula Bantina in Marcel Mauss’s The Gift, but that may be a post for another time. (For now, I will just say: beware the 1990 Routledge translation by W.D. Halls! It is full of incorrect statements about ancient Italy and garbled Oscan. The 1966 translation by Ian Cunnison is much better. Apparently this is a popular text in history undergraduate courses – if you are including this on your readings lists, do not set the 1990 translation! If you care about accurate Oscan, anyway. You may not.)

You can download the handout from my talk with all the quotes here. It’s a bit of a grab bag of mentions of Oscan from the sixteenth century to the present day, but I hope it gives a bit of a flavour of the reception of Oscan in non-linguistic texts.

The papers were not the only offerings of the day. Anna Judson, as usual, made some excellent Greek alphabet cakes. I grabbed the kappa. 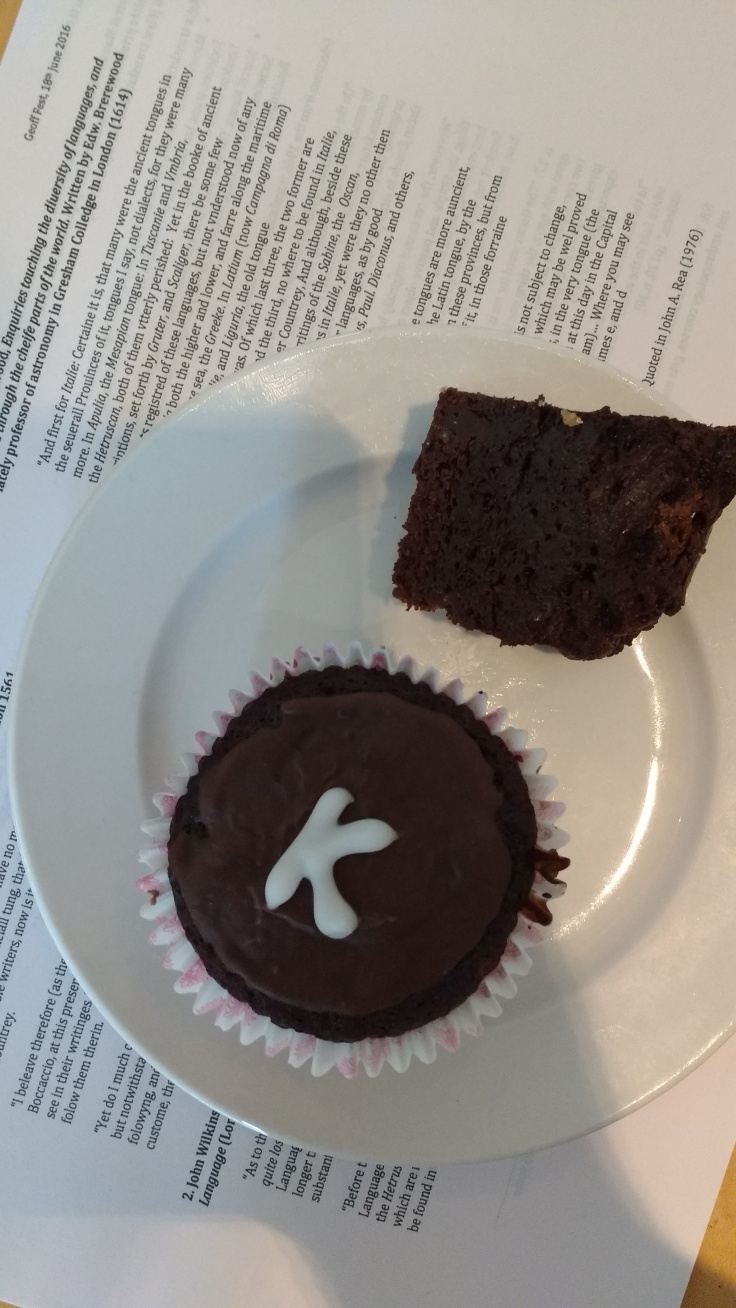 And Ester Salgarella, one of the PhD students in the department, made a celebratory Linear B tablet, reading o-ro-ko, wa-na-ka VIR 1 (I’ll leave that for you to figure out). Here’s a picture of Pippa Steele presenting the tablet to Geoff after her talk.

It was a really lovely occasion, and a great end to the academic year. And so all that’s left is to say: good luck in your retirement, Geoff!