I mentioned that at Geoff Fest last week I gave a paper on the “reception” of Oscan – mainly consisting of mentions of Oscan in slightly unexpected contexts from the sixteenth century onwards. One of those instances was in An Essay towards a Real Character and a Philosophical Language, written by John Wilkins in 1668.

Wilkins was a philosopher and intellectual who is most famous for inventing the “Real Character” – a constructed language which he envisioned as facilitating communication across languages and cultures. The Real Character doesn’t represent the sounds of a spoken language, but breaks language down into concepts, so that each word captures the semantics of a word. This means that the system can be used equally well by speakers of multiple different languages, because the words are essentially ideograms.

The Real Character works something like this: all the concepts in the world were divided into forty main Genera, each of which is represented by a two-letter syllable. Each Genus is then divided into Differences, adding another letter to the word. Differences are then divided into Species, adding a fourth letter to the word. For instance, Zi identifies the Genus of “beasts” (mammals); Zit gives the Difference of “rapacious beasts of the dog kind”; Zitα gives the Species of dogs.

This obviously requires careful listing of all possible concepts. Here’s just one of the pages dealing with types of fish. 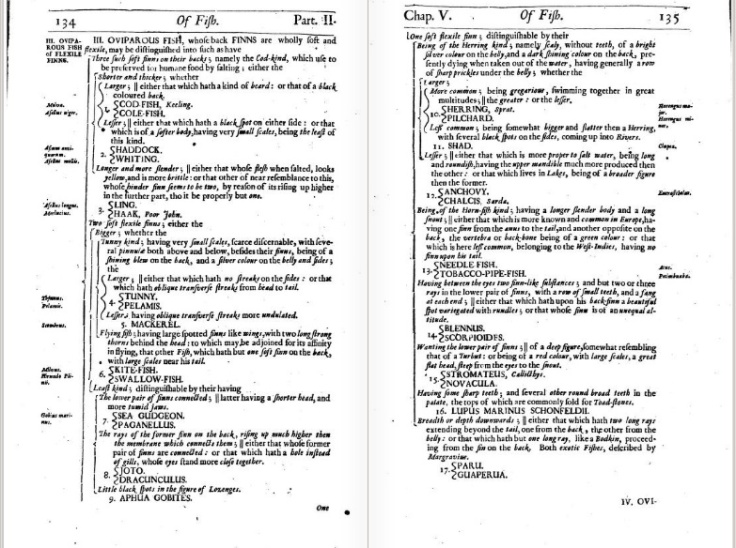 There was also a special script that went along with all this, which looked something like this:

This idea didn’t catch on, but to be fair to John Wilkins he also kind of invented the metric system, which did quite a lot better in the long run.

What’s interesting for the ancient linguist is that the languages of ancient Italy get a mention in Wilkins’s justification for why a universal language was needed in the first place.

As to the second Quere, Whether any of the Ancient Languages be now quite lost; it may be answered, That if in some few hundreds of years a Language may be so changed as to be scarce intelligible; then, in a much longer tract of time it may be quite abolished, none of the most radical and substantial parts remaining: For every change is a gradual corruption…

Before the flourishing of the Roman Empire, there were several native Languages used in Italy, France, Spain. In Italy we read of the Messapian, the Hetruscan, the Sabine, the Oscan, the Hetrurian or Tuscan Languages; which are now thought by Learned men to be utterly lost, and nowhere to be found in the World.

Essentially, Wilkins saw a problem with spoken languages. It wasn’t just that speakers of different languages found each other impossible to understand. Even if everyone learned the same language, spoken language is inherently problematic because it changes so much as to become unintelligible to later generations. Languages that were once widely can even completely disappear – and the prime example of this is the huge number of languages in Italy which are now completely gone. In his opinion, we can only guard against our words becoming unintelligible or disappearing by adopting a rationally constructed, artificial language.

I don’t necessarily agree of course – but I like that Messapic, Etruscan, Sabine and Oscan are the examples he went with to prove his point.

If you want to learn more, you can read Wilkins book over here.

One thought on “Ancient languages and John Wilkins’s Real Character”